WHERE THINGS COME BACK by John Corey Whaley won the 2012 William C. Morris Debut and the Printz in the same year. The blurb on the front says, “Every now and then a book rises to the top. This one soars,” by Ellen Hopkins. I had read the synopsis and even recommended the book to a friend before I even read it myself.

I regret that decision.

But not for the reasons you just jumped to after reading that.

Where Things Come Back by John Corey Whaley comes Jupiter-approved. Yes, he let me just pose him with the book and didn’t mind at all. Small minded cats are wonderful.

I regret that decision because of all the insane amount of FEELS this book gave me (this blog is becoming the blog of RANDOM CAPS and FEELS and incoherent RAMBLINGS).

Where Things Come Back is a story about yes, where things come back, but if you want to regain all of your senses, your scrambled feelings, shed tears, and lost breath, then you can’t read this book.

If, on the other hand, you don’t mind sacrificing your tears, oxygenation, and emotional stability for the worthy cause of a brilliantly written, superbly spun story, then please, by all means, close your computer and walk or drive to your nearest bookstore to purchase a copy of this book. I’m partial to the paperback’s cover but I’m not picky. Just get the book.

Look, I get it. I’m late to the WHERE THINGS COME BACK boat. I picked up the book maybe six months ago and read the jacket blurb, and put it down. It doesn’t mean it was a bad blurb. It just wasn’t what I was looking for at the time. And I tend to avoid award winning books. Yes, I realize that makes little sense and no, I’m not trying to be a hipster with my book choices. I just don’t usually gravitate to award winning books. I feel bad for the books that don’t have gorgeous stickers on their covers. They need attention too. I’m only half joking here. There’s a part of me that likes reading something that hasn’t gotten the accolades it may or may not deserve because I want everyone to be happy and feel loved and I suspect that one day, I will be an author whose books don’t have stickers 😉

That being said, now that I’ve admitted that not picking this book up a year ago was a GRAVE ERROR on my part, let’s get down to the nitty gritty.

There may be spoilers after this, and this is already a long post for those reading it on a reader, so, please, follow me after the jump! (It’ll be fun, I promise.)

I have this habit where I read the author’s acknowledgements first. I totally forgot I did that two weeks ago when I first bought this book so I’m all blabbering to my cousin that I read “somewhere” that the story was partially inspired by a Sufjan Stevens song. Rereading the acknowledgements at the end, I was like “Oh right. That somewhere was here.”

See? Sufjan Stevens. I don’t listen to a lot of his music but hey, here it is. Gabriel liked it.

Per usual, my reviews don’t tend to be particularly coherent. It’s less of a REVIEW than a REACTION.

I loved this book. I love a lot of things. I love rather easily, actually, and books are the easiest things in the world to love (and hate, but we’ll get to that). But this book is special. This book did, as Ellen Hopkins said on the front cover blurb, soar. This is the book that 100 other books I’ve read wish they were. This was utterly deserving of its honors and I hope that JCW (do you mind, sir? It’s easier. It’s like NPH) continues to write.

While the protagonists and most of the characters are young adults, WTCB is a fairytale at its core, a fictional tale that crosses genres and categories, and easily enjoyed by teens, “young adults/new adults”, and adults.

Cullen Witter’s younger brother Gabriel is gifted, ‘wise beyond his years’, and more capable of handling the small suffocating town of Lily, Arkansas than his older, smart, but suffocated brother. So when it is Gabriel who disappears inexplicably, Cullen’s left feeling less in control, more lost without ever leaving the familiarity of his town, and more alone than ever before despite the increasing number of people in his life. At the same time Gabriel disappears, a reportedly extinct woodpecker is allegedly discovered in Lily and researchers and fans flock into the town to celebrate the Lazarus woodpecker.

(If you said, “Gabriel is the name of a famous Angel of God! And Lazarus is that biblical story about overcoming trials! I see a trend here!” you’d be really smart. This Jewish girl had to google Lazarus while she was writing this blogpost because she had a Sneaky Suspicion it was Important and she found this that made her go, “I see what you did there, JCW.”)

“Everything that had, in some way or another, led him to some nothing town where, as it seemed, things could come back from the dead, mistakes could be rectified, lives could be started over.” (page 207)

Lily, Arkansas is an ordinary town, even if at points in the story, I felt the stretch towards magical realism, the same sense of a powerful place that I frequently understand and sense in Toni Morrison’s writing. There’s never an explicit statement of it, but people come back to Lily, even after they spend their whole lives running away from it in one way or another. Alma, a smart trapped girl who leaves Lily, gets knocked up, loses the baby after she marries the baby daddy, returns home and it feels like a homecoming. Cullen, who is smart and cynical and completely at a loss for coping with his brother’s disappearance and the bird and the whole damn town, comes to terms with Lily in his own metaphorical ‘coming home’. Lucas, who is smarter and less cynical and inexplicably kind despite the shit that life has thrown at him, finds home in Cullen’s broken home, still within Lily. The woodpecker that supposedly was extinct, was home in Lily.

I cite this all the time but because I love it, so don’t judge me. Jack Zipes said in Fairytales and the Art of Subversion that,

Initially the young protagonist must leave home or the family because power relations have been disturbed.  Either the protagonist is wronged, or a change in social relations forces the protagonist to depart from home.  A task is imposed, and a hidden command of the tale must be fulfilled.  The question which most of the Grimms’ tales ask is:  how can one learn–what must one do to use one’s powers rightly in order to be accepted in society or recreate society in keeping with the norms of the status quo?  The wandering protagonist always leaves home to reconstitute home.

This is the story of coming and going, constantly, of people in and out of other people’s lives and, as John Green says in The Fault in Our Stars, “The marks humans leave are too often scars.” The characters of WTCB are damaged people. They are imperfect. They say hurtful things and they use each other. They also love each other and forgive each other. They also accept each others’ shortcomings and they push each other to be better people.  This is the story of what people do to each other in our short time on this planet. It’s about losing people, and getting people back that you don’t necessary deserve to get back because, as Lucas says, “These things just happen, Cullen. You just are my friend. That’s that. No explanation needed.” (WTCB, pg 120). 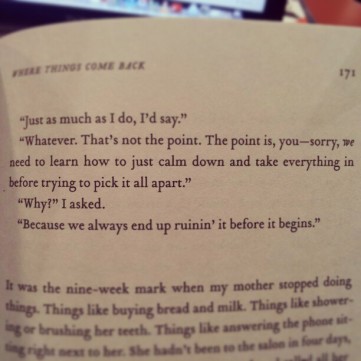 Wise words that made me cry.

WTCB made me laugh. It made me cry in public, which is not something that happens often with books because I tend not to like making a scene in places that I frequent, like Barnes & Noble (rest stops along a highway that I won’t ever drive again? WHOLE DIFFERENT STORY. I will gladly cry in public there.) Twice I put down the book and went for a walk because it was painful and it hurt and it was too real and too raw at the moment.

But the story soared on its own wings. The book certainly deserves its accolades, as an entire entity, but the story also soared and I promise you, I PROMISE YOU, you need to keep reading until the very very end.

Because you’re probably going to be 30 pages from the end and tweeting the author about how UPSET you are and how you’re chanting in your head, “no no no no no no” like I did.

So. Hang in there. It Gets Better and Things Come Back!

Looking for Something? Search!